Voice alerts are one of MessageMyWay's most powerful features, and we've added a little tweak.

What is a Voice Alert?

We take your message text, turn it into speech, and then call everyone and read out the following:

This repeats three times, so people can confirm details the second or third time round. The repetition also means answering machines will get the whole message, despite losing the first few seconds while they play their recorded message. 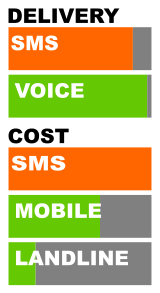 SMS is more convenient, because you don't need to stop what you're doing to answer the phone. But in every other way, voice alerts are better.

Voice alerts are a lot more reliable. If a voice alert call cannot be connected (busy, no answer or network congestion), we retry every three three minutes for quarter of an hour. This, along with voice having priority over SMS texts when networks are congested, means 97% of voice alerts get delivered, compared to a surprisingly low 87% of SMS texts.

Voice alerts are cheaper too. In New Zealand, SMS costs 15 cents per message, compared to 3 cents for a landline and 10 cents for mobile voice calls.

Whose Voice is it?

When we said "turn it into speech" above, we glossed over a rather complicated part of the system. Behind the scenes, we use one of the latest voice synthesis systems to generate speech from your message text. Although you can still tell that it is machine-generated, it is much better than most of the robot voices you hear, and the only complaint we've had is that people don't like that it is a man's voice.

Now that isn't a problem either. There is a new call voice option on your SETTINGS page so you can choose whether your alerts are read out in a man's or woman's voice.